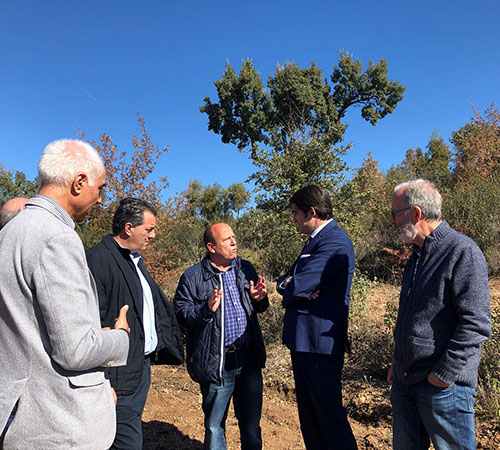 3,000 hectares of pure or mixed cork oak plantations have been created through a Rural Development Programme implemented by the Junta de Castilla y León (regional government).

The programme, costing 5.5 million euros, has seen the creation of some plantations of pure cork oak (Quercus suber) and others mixed with holm oak (Quercus ilex).

At the beginning of March, the Head of Environment and Forestry Policies of the Junta de Castilla y León, Juan Carlos Suárez-Quiñones, visited the municipality of Valdelosa in the province of Salamanca to understand more about the current situation of its cork oaks, one of the most relevant of this region, by area and environmental value.

During the visit, the political leader highlighted the environmental value of this natural area and underlined the resources it generates. The work of maintaining and conserving cork oak, carried out by residents of the municipality, "can maintain a score of jobs that contribute to fixing the population in this rural area”.

The area of forests with cork oak as the main species has been estimated at 5,700 hectares in Castilla y León. This area is mostly restricted to the province of Salamanca and to a much lesser extent to the provinces of Ávila and Zamora. Occasionally it also appears in Burgos, Valladolid and León.

Within the province of Salamanca, the most important nucleus of the species is found in the municipalities of Valdelosa, Zamayón, Santiz and Valdunciel, although there are isolated masses in other areas of the province, for example, in the south of Salamanca, Quilamas, Herguijuela de la Sierra and Valle de Batuecas, also have cork oak of great ecological value.

This municipality has received several grants for reforestation purposes and support for the improvement of cork oaks. Between 1997 and 1999, the equivalent of 498,000 euros was invested in Valdelosa cork oak groves, to cover 480 hectares. These funds (which consisted of plantations, support for regeneration, firebreaks and enclosures) were framed in the lines of 'Forestation of Agricultural Lands' and 'Improvement of cork oaks', of the Programme of the Junta de Castilla y León, linked to the Reform of the Common Agricultural Policy (CAP).

I'm dazzled, I should state. In all respects infrequently do I run over a blog that is both useful and engaging, and let me let you know, you ve hit the nail on the head. Your blog is significant.. chinesisches restaurant baden baden

Incredible post yet I was pondering whether you could create a litte more regarding this matter? I"d be outstandingly appreciative if you could elucidate a slight bit further. Worth it! 안전한토토사이트

Simply unadulterated exemplary stuff from you here. I have never observed such a splendidly composed article in quite a while. I am appreciative to you that you created this! 英文補習

I expected to thank you for this wonderful read!! I certainly loved every single bit of it. I have you bookmarked your site to take a gander at the new stuff you post. 英文補習

Your information is very helpful, thank you for summing up the information for the blog. หนังออนไลน์

It is a very admirable work. And I would like to suggest a movie about society for her to try. You must really like it. Reborn Rich

Thanks for a very interesting blog. What else may I get that kind of info written in such a perfect approach? 라이브카지노

This article gives the light in which we can watch the truth. This is exceptionally decent one and gives indepth data. A debt of gratitude is in order for this decent article.  바카라사이트

cvs viagra over the counter levitra vs viagra sildenafil buy

Top Mumbai call girls are the best service provider in Mumbai. Here you can get different's types of girls, like Russian, Muslim, Asian, and African, so call our call girl agency and get your favorite girls at your room or hotel.

vardenafil hcl vs viagra levitra canadian where to buy vardenafil

I might want to thank you for the endeavors you have made recorded as a hard copy this article. I am trusting a similar best work from you later on also. Truth be told your exploratory writing capacities has motivated me to begin my very own BlogEngine blog now. Extremely the blogging is spreading its wings quickly. Your review is a fine case of it. 補習數學

I'm so happy to finally find a post with what I want. 바카라게임사이트 You have inspired me a lot.  If you are satisfied, please visit my website and leave your feedback.

My companion referenced to me your blog, so I thought I'd read it for myself. Interesting experiences, will be back for additional! dse英文課程

Numerous schoolwork on the nonstop chase alongside offstage making progress toward winning. Certainly not joined, easy to-fall because of wayside; And not examination, subsequently into a way travel toward the dark. 英文補習老師

They generally have a site where you can accumulate data about them and even surf through to get to realise them better. Call Girls in Indirapuram are fearless and will assist you with moving past your dejection and tired life. A fast break from the unremarkable way of life is constantly required.

what is better viagra or cialis otc cialis cialis drug

Great article in addition to its data and I emphatically bookmark to this site in light of the fact that here I generally get an astonishing information as I anticipate. A debt of gratitude is in order for this to impart to us home massage

I’m not sure exactly why but this weblog is loading incredibly slow for me. Is anyone else having this problem or is it a problem on my end? I’ll check back later on and see if the problem still exists. 바카라사이트추천

Your ideas have inspired me a lot. I want to learn your writing skills. There is also a website. Please visit us and leave your comments. Thank you. 온라인카지노

My friend mentioned to me your blog, so I thought I’d read it for myself. Very interesting insights, will be back for more! 網頁製作

We are truly thankful for your blog entry. You will discover a great deal of methodologies in the wake of going to your post. I was precisely scanning for. A debt of gratitude is in order for such post and please keep it up.  客製化網頁

Hello, I read the post well. 온라인바카라 It's a really interesting topic and it has helped me a lot.  In fact, I also run a website with similar content to your posting. Please visit once

Hello, I read the post well. 온라인바카라 It's a really interesting topic and it has helped me a lot.  In fact, I also run a website with similar content to your posting. Please visit once