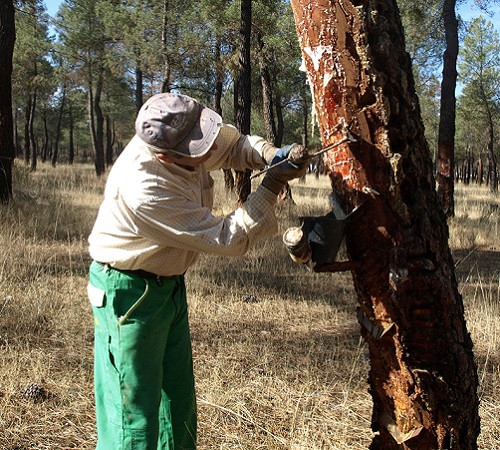 Last November 5th more than fifty people and several media attended the INCREDIBLE Science to Practice event Resin use, territorial development and demographic challenge, held in Soria, Spain, in Cesefor headquarters. The day served to draw a picture of the evolution and today sector problems, and to raise some political and administrative solutions to support the natural resin sector. You could access the presentations on the INCREDIBLE project website at the following link: link to the presentations.

The Spanish representative of the forest municipalities commission, Marta Corella, stressed the essential role that the forestry sector must play in the new model based on bioeconomy, especially a product such as natural resin that contributes to the rural areas prosperity while allowing progress in the replacement of fossil raw materials sources in a sustainable manner. It is necessary to inform the general public about the importance of the forestry sector: "Society needs us even if it doesn't know it," she concluded.

From the Junta de Castilla y León (regional Government), Javier Ezquerra described the production progression in Castile and Leon, which represents 86% of Spanish production, from approximately 2,000 tonnes in 2010 to almost 12,000 tonnes in 2018, with a parallel increase in the number of resin tapper workers, from 100 to 1.0000.The speaker highlighted some of the threats to the resource such as pests, fires or changes in the composition of forests and, in the short term, negative price fluctuations on international markets, with the consequent loss of extraction activity viability. According to Ezquerra, one of the keys to the sector viability is to improve the resin tapper working conditions.

Engineer Jesús Prieto stressed the importance of natural Iberian resin sources for the supply of the industry which, in his opinion, has certain characteristics that make it a preferable option to resin from other sources, not only from the technical point of view, but also for its implications in terms of environmental sustainability and the generation of positive externalities generated from the local to the Community scale. Concepción Martinez, from the Natural Resins Society, explained the mentoring program that the company develops to accompany new resin tappers during the beginning of their activity.

The resiner's point of view came from the hand of Alejandro García Ordóñez, from the Pinaster Environmental Services Cooperative of León, who reviewed the main entry barriers to the resin tapper activity from different perspectives: physical, economic, social and legal-administrative. García Ordóñez exposed several measures that, in his opinion, should be addressed to support the resin tapper worker, among which are some legal and administrative measures related to the territorial contract, the terms of conditions, insurance for the harvest, the support of local government and, above all, the inclusion of the activity in the Community Agricultural Policy.

Sociologist Guadalupe Ramos Truchero, from the University of Valladolid, presented the progress of a very interesting work carried out within the SustForest Plus project, on the sociological profile of the Spanish resin tapper worker population. The work carried out by the researcher leads to divide the population into four main categories. The upturn in activity was fundamentally fed by two trends, one derived from the context of unemployment "the rebounded of the crisis" and those who choose resin as a desired way of life, who wants to live in the village with their family working for themselves. According to Ramos Truchero, training resin workers is the essential element for the activity to be profitable and sustainable.

The proposal for a Community Agricultural Policy for the period 2021 - 2027 is currently being negotiated. Blanca Rodríguez-Chaves Mimbrero (Autonomous University of Madrid), who is carrying out specific work on the resin sector integration into European policies thanks to the SustForest Plus project, offered the keys to the inclusion of forestry activity and, in particular, the natural resin sector, in the new green architecture of the CAP; forest management is an antidote to depopulation; resin activity fits perfectly with the nine specific objectives of the new CAP. Rodríguez-Chaves considers that the opportunity offered by this negotiation should be taken advantage of by the resin sector to include tractor projects in the Rural Development Plans that deploy the CAP over the territory. "Now is a very good time to present specific measures for the forestry sector, both Pillar I and Pillar II", indicated the rapporteur.

The expert in administrative law, José Miguel García Asensio presented the territorial contract scheme as an instrument to guide and encourage the activity of resin producers, as agricultural exploitation title holders from the administrative point of view, for the benefit of a sustainable rural environment development. This work is being developed thanks to the SustForest Plus project, financed by the INTERREG Sudoe programme. The territorial contract will allow the establishment of commitments between an administration and the resin tapper, so that the worker can receive compensation for the fulfilment of these commitments, as well as allowing the establishment of incentives and the remuneration of positive externalities.

The presentation session was closed by João Lobo, who presented the project for the creation of the European Network of Resinous Municipalities, promoted by the SustForest Plus project; a transnational organization whose vocation is to represent and promote the resin sector interests on a European scale, among others the possible integration of the sector in the Community Agricultural Policy.

The questions and debates raised, both during the meeting and in the lively groups that formed the speakers and attendees, left the feeling that, although the resin use of pine forests is a key labour resource to combat depopulation, the natural resin sector is at a critical time that may lead to a new setback in activity, which may mean the loss of a splendid opportunity for our territories: now is the time to seek solutions.

There are several problems faced by the resin tapper, but the most urgent, the one that makes the sector more fragile and vulnerable, is related to the instability of the international market of resinous products, highly volatile and unpredictable.

In this context, the continuity of activity in Europe depends on taking the appropriate political decisions at local, regional, national and Community levels. During the day it became clear that the mechanisms exist - the CAP, the territorial contract, the support of local entities, the organisation and involvement of all the members of the sector - but it is necessary to demand that these mechanisms be set in motion in a concrete and urgent way.

The phenomenon of depopulation, rural abandonment, has been at the centre of all political debates in recent times, however the solutions provided so far are not clear. The resin sector proposes a realistic and viable tool to alleviate depopulation, provided that the public administrations bet on it, as long as the question is answered in an affirmative way: do we want resin workers working in our forests?

The premise of the conference Resin Use, Territorial Development and Demographic Challenge was that it was the sector itself, those attending the event, who responded to the question What political initiatives could be promoted to achieve support for the resin sector on a European, national, regional or local scale? Now we offer you the opportunity to make your contribution again through the following survey (questions in Spanish, you can answer in other languages) that you can complete online at the following link: link to the survey.

If you or the entity to which you belong is committed to the viability of the European resin sector, we invite you to express your interest in the creation of the European Network of Resin Territories, a sectoral organisation that wants to promote and defend the interests of natural resin on a European scale. Link to the early membership form: link to the membership form.

You have made your stand quite well!.
buy persuasive essay homework now professional resume writing service

Helpful content. Many thanks!
write my essay for me no plagiarism help writing thesis best writing service reviews

Helpful content. Many thanks!
write my essay for me no plagiarism help writing thesis best writing service reviews

Common-sensical communication is appreciated butt of its affluence and ease: what guys and girls inveterately talk back themselves on the fifth or sixth engagement, on the network is revealed 5-10 minutes after the start of the conversation. On the other share, it is easier to lie or exaggerate on the Internet. Someone is anxious these reasons, the effectiveness of online dating is questioned nearby miscellaneous users.
this website

Thanks, Terrific information!
please help me write my essay do my homework custom dissertation writing services

Cheers. I appreciate it!
what is the best essay writing service writing papers write my personal statement

With thanks, I like it!
essay writting service write my essay best freelance writing websites

Whoa lots of very good data.
writer for hire
essay typer
write my thesis for me
how to be a good essay writer j77gnb 381b1d5